An abdominal aortic aneurysm (AAA) is a bulging of the aorta, the body’s main blood vessel, which runs from the heart down through the chest and stomach. Prevalence of AAA in the population is high, up to nearly 13% depending on age group, particularly for men aged 65 and over. An AAA can get bigger over time and rupture, causing life-threatening bleeding. There is a high mortality rate of around 80% in patients with ruptured AAA; only dropping to around 50% when patients undergo surgery. 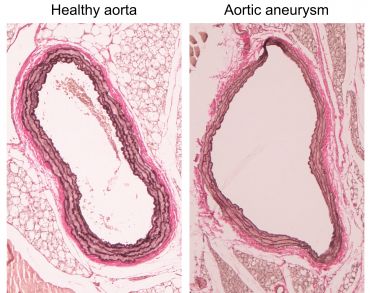 Comparing a healthy aorta with what it looks like in the event of an aneurysm
While clinicians can monitor the beginnings of AAA, a rupture can occur suddenly without warning. Currently, the only available intervention involves a high-risk surgical procedure, which is only undertaken if there is a real danger of rupture. There are no pharmacological treatment options because the underlying causes of AAA are not fully understood.

Scientists know that in some patients there is a genetic predisposition to AAA, and large genomic studies have identified that mutations in a large protein called LRP1 predispose people to aortic aneurysm, as well as other major vascular diseases. However, the mechanism responsible for how these mutated genes cause the disease has so far been unknown.

Vascular smooth muscle cell differentiation is essential to the development of healthy blood vessels. The smooth muscle cells of the aorta play a crucial role in maintaining its stability and protecting it against disease. In their healthy contractile state, they provide strength and produce the elastin proteins to withstand forces and assist with pumping blood around the body. In disease, damage to the lining of the aorta causes accumulation of fat and allows immune cells to infiltrate vessel walls. In response, the vessel attempts to repair itself and the smooth muscle cells try to make more smooth muscle. However, in doing so, the cells start to de-differentiate and become less contractile.

They undergo proliferation, presumably with good intentions to try and make more smooth muscle, but actually it makes the problem worse.

According to Associate Professor of Cardiovascular Development and Regeneration Nicola Smart: 'They undergo proliferation, presumably with good intentions to try and make more smooth muscle, but actually it makes the problem worse. In doing so, they also break down the elastic layers of the heart that keep the vessels stable. These layers are supposed to hold the whole vessel together, keep it tight and keep it strong, and it all breaks apart.'

But why do the smooth muscle cells react in this way? Professor Smart's research group has found that a small protein called Thymosin b4 (Tb4) is working alongside the larger LRP1 protein to determine how many 'growth factor receptors' are sent to the cell's surface to respond to disease. If Tb4 is absent, then instead of being destroyed, too many receptors are recycled back to the cell's surface, which makes the smooth muscle cells hyper-sensitive and in essence overreact.

Professor Smart’s team then compared their results with AAA samples from the Oxford Abdominal Aortic Aneurysm study. The OxAAA team surgically repair aneurysms in human patients, removing diseased tissue from the lining of the abdomen in the process. Through examining these samples, the Smart group were able to confirm that Tb4 and LRP1 interact in both healthy and diseased patient vessels. Consequently, their study sheds light on a key regulatory step in AAA and Tb4 has been identified as a promising new drug target to potentially treat the disease.

More details can be found in The Journal of Clinical Investigation.

The Oxford Science Blog gives you the inside track on science at Oxford University: the projects, the people, and what's happening behind the scenes. Curated by Ruth Abrahams, Media Relations Manager (Research and Innovation).