We are particularly interested in using cell biological, biochemical and mass spectrometry approaches to study the biology of ubiquitin processing enzymes and other proteases. We are also interested in understanding their role in immunity and cancer related disease pathologies. 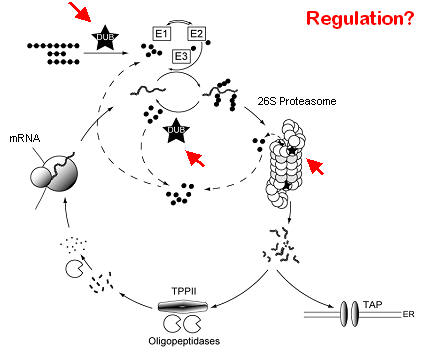 Regulation of the lifespan of proteins is key for most biological processes and when altered, can often associate with progression of diseases. When proteins reach the end of their lifetime, most of them get modified by the attachment of ubiquitin, a small protein of 76 amino acids. This modification has been implicated not just in the elimination of damaged proteins, but also in physiological proteolytic control of processes such as transcription, signal transduction, and cell cycle transitions. So far, analysis has principally focused on ubiquitin (ub) attachment, with several hundred ub conjugating enzymes characterized to date. Much less is known about enzymes that remove ub from substrate proteins, yet around a hundred genes have been identified, sharing consensus motifs for deubiquitylating enzymes (DUBs). Such diversity is inconsistent with a simple recycling function and strongly suggests a range of specific (but currently largely undiscovered) biological functions. Members of the DUB family are already known to contribute to neoplastic transformation and are implicated in neurodegenerative diseases, making them attractive targets for drug design.

The Ubiquitin-Proteasome System in Health and Disease 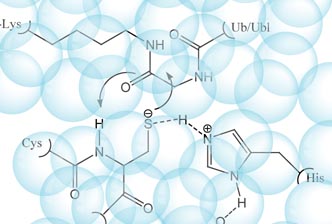 Our group studies how proteins, the main "machines" in the cells of our body, are made, reach their destination to do their work and are eliminated when they become damaged or are no longer required. This is a carefully regulated process critical for all biological functions in the body. When disturbed, it can lead to a variety of different illnesses, such as cancer, Alzheimer, Parkinson's or autoimmune diseases. One of the main molecular components responsible for this is the Ubiquitin-Proteasome System. The central element of this process is the small protein ubiquitin that can be attached to proteins as a "mark" so that they can be recognized, transported to where in the cell they are needed or eliminated. The molecules that destroy these marked ("ubiquitinated") proteins are called proteases that can chop them into small pieces (peptides and amino acids). We are particularly interested in using cell biological, biochemical and proteomics & mass spectrometry based approaches to study the biology of ubiquitin processing enzymes and other proteases. We are also interested in understanding their role in immunity and cancer related disease pathologies.