How to tackle toxic protein aggregates in Parkinson’s disease 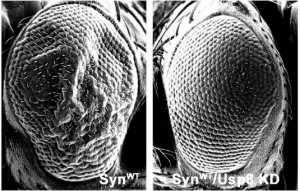 Toxicity in the fly’s eye provides clues for how to tackle Parkinson’s disease.

In Parkinson’s disease, misfolded proteins such as α-synuclein accumulate in neuronal inclusions termed Lewy bodies. George Tofaris’s team from the University of Oxford Clinical Neuroscience Department and Benedikt Kessler from the TDI investigated the role of α-synuclein handling and the death of neurons that represents a hallmark of Parkinson’s disease.

The researchers used a fly model and tested the effect of elevated presence of α-synuclein in the eye. Interestingly, they observed that removal of the gene called Usp8 in the fly’s eye reduced α-synuclein levels and associated eye toxicity (illustration). Usp8 is a protease that cleaves ubiquitin, a small protein that can be “tagged” to protein substrates such as α-synuclein.

When Usp8 protease function is removed, it can correct defects due to α-synuclein accumulation, similar to what is observed in neurons affected in Parkinson’s disease. This discovery suggests a novel route to develop drugs for the treatment of this brain disease.